I read a few quotes from Laird Hamilton in a recent issue of Outside Magazine that struck me and got me thinking of kayaking, both as a hobby, and in my role as an instructor.  One of the quotes is:

“We are each our own greatest inhibitor. People don’t want to do new things if they think they’re going to be bad at them or people are going to laugh at them. You have to be willing to subject yourself to failure, to be bad, to fall on your head and do it again, and try stuff that you’ve never done in order to be the best you can be.”

This is very true, and particularly so for people developing new kayaking skills, or even just paddling in new places or with new people. As instructors, it’s sometimes easy to forget that people can be anxious just signing up for a class.  When you start moving toward more advanced classes and conditions, the fear grows, even if our students, friends (ourselves) or co-instructors don’t want to admit it, and hide it well. 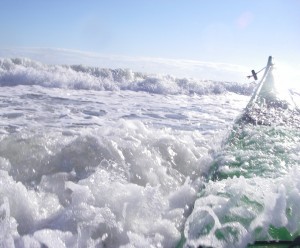 Contrast that to most instructors, and students who have already gained some experience in with the skills being taught, and you’ll often see a casual air, that may even feel dismissive of others’ fears.  It’s certainly not intended, but from the perspective of someone concerned about looking bad, holding back others, being laughed at or just being judged, and you have the potential for some starting out already feeling less than their best.

That may very likely be the person who is already setting the stage with comments about feeling under the weather, not getting a good night sleep or having a gear issue.  How do we let them know it’s okay to feel uncomfortable, and recognize the real issue?

Great instructors and coaches know, and detect, this intuitively and “meet their students where they are,” both skill-wise and mentally/emotionally.  With awareness of what your student is going through as a starting foundation, it’s much easier to help them challenge themselves in a productive manner so they grow and learn, instead of feeling like they are surviving or struggling to keep up.

All of us may need the reminder that just because we are comfortable paddling out into breaking surf, our students may need to hear that they won’t look silly. They won’t fail (just trying is part of success).  They won’t be laughed at.  They will be challenged.  They will learn and progress.

Ultimately we each develop our own style, whether it’s humor, empathy, tough love, etc.  and we recognize that sometimes the personalities just won’t mesh, and that’s okay.  The quote is a good reminder that although our students signed up and showed up for the class, they may be starting from a place of fear.  We can help by acknowledging the fears, encouraging self-challenge and supporting that third, fourth or tenth effort.

In short: start from where the student is.  Not where we are.